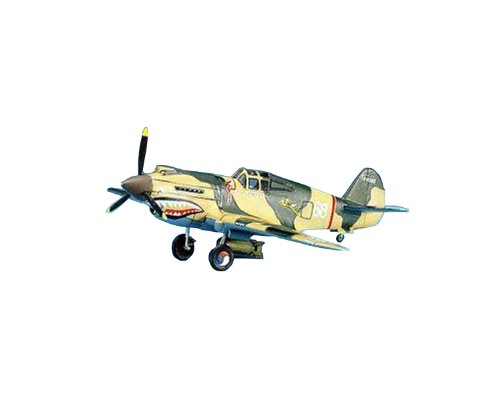 Brand : Academy
from USA
to Croatia
in 5-8 days
At your doorstep by Aug 10  to Aug 13 with standard delivery

From the Manufacturer --------------------- This is an Academy 1/72 scale plastic model kit. When the requirements for the P-40 were formulated, no prospect of high-altitude enemy attack against the U.S.A was envisaged, so that coastal defence and ground attack were the main tasks indicated. Low-altitude flying qualities and rugged construction therefore received priority, and, in fact, the P-40 was subsequently to prove itself an excellent ground-attack weapon. But at the time of the Japanese attack on pearl Harbour this fighter was already approaching obsolescence, despite having been in production for less than two years. Nevertheless, between 1940 and 1944, when acceptances were terminated, a total of 13,738 P-40 fighters were delivered to the U.S.A.A.F., the peak number in service being 2,499 in April 1944. The P-40 was a relatively clean design, and was unusual for its time in having a fully retractable tail-wheel. One hundred and ninety-seven P-40s were built in 1939-40 for the U.S.A.A.F., and many more were sold abroad to Britain and France. In the R.A.F., which service purchased 140 outright, it was knows as the Tomahawk MK.I, IA, and IB. This "C" model carries the markings of the plane flown by Charles Older, of the 3rd Squadron, "Hell's Angels", AVG, based at Kunming, China in the spring of 1942. The 1/72 model kit contains 46 components, fully engraved panel lines, weapons, and the landing gear can be optionally modeled up or down.
Show More
Reviews

Disclaimer: The price shown above includes all applicable taxes and fees. The information provided above is for reference purposes only. Products may go out of stock and delivery estimates may change at any time. Desertcart does not validate any claims made in the product descriptions above. For additional information, please contact the manufacturer or desertcart customer service. While desertcart makes reasonable efforts to only show products available in your country, some items may be cancelled if they are prohibited for import in Croatia. For more details, please visit our Support Page.